Garhwal is the north-western region and administrative division of the northern Indian state of Uttarakhand which is home to the Garhwali people. Lying in the Himalayas, it is bounded on the north by Tibet, on the east by Kumaon region, on the south by Uttar Pradesh state, and on the north-west by Himachal Pradesh state. It includes the districts of Chamoli, Dehradun, Haridwar, Pauri Garhwal, Rudraprayag, Tehri Garhwal, and Uttarkashi. The people of Garhwal are known as Garhwali (लाली) and speak the Garhwali language. The administrative center for Garhwal division is the town of Pauri.

The Garhwal Himalayas appear to have been a favorite locale for the voluminous mythology of the Puranic period. The traditional name of Garhwal was Uttarakhand and excavations have revealed that it was formed part of the Mauryan Empire. The region consists almost entirely of rugged mountain ranges running in all directions, and separated by narrow valleys which in some cases become deep gorges or ravines. The only level portion of the district was a narrow strip of waterless forest between the southern slopes of the hills and the fertile plains of Rohilkhand. 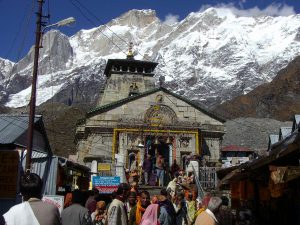