Rudraprayag is a town and municipality in Rudraprayag district in the Indian state of Uttarakhand . Rudraprayag is one of the Panch Prayag (five confluences) of Alaknanda River , the point of confluence of Alaknanda and Mandakini rivers. Alaknanda then proceeds towards Devaprayag where it joins with Bhagirathi River to form the river Ganges. Kedarnath , a Hindu holy town is located 86 km from Rudraprayag. Rudraprayag is also known for his infamous man-eating leopard (Leopard of Rudraprayag) which is reputed to have killed over 125 people, hunted by Jim Corbett.

How To Reach:
Air: The nearest airport is the Jolly Grant Airport near Dehradun 183 km (114 mt) away.
Railway: The nearest railway station is at Rishikesh . However, Rishikesh is a small railway station not connected by fast trains. Haridwar railway junction, 24 km farther from Rishikesh, has train connections to most major cities in India and is, therefore, the railhead for Rudraprayag.
Road: Rudraprayag lies on national highway NH58 that connects Delhi with Badrinath and Mana Pass in Uttarakhand near Indo-Tibet border. Therefore all the buses and vehicles that carry pilgrims from New Delhi to Badrinath via Haridwar and Rishikesh in pilgrim season of summer months pass through Rudraprayag on the way to Joshimath and further north. Rishikesh is the major starting point for road trip to Rudraprayag and regular buses operate from Rishikesh bus station to Rudraprayag. The road from Rishikesh to Rudraprayag is 141 km (88 mt) via Devprayag and Srinagar .
Temples:
Rudranath Temple: Rudranath Temple, Rudrapathag is named after Lord Shiva and Lord Rudranath temple is situated at the confluence of Alaknanda and Mandakini. According to mythology Narda Muni worshiped god Shiva here to learn music from him. The god then teach Music in his form of Rudra (Lord of Music) to Narad Muni. Narad Muni did his worship, now this rock is known as Narad Shila.
Chamunda Devi Temple: Chamunda Devi temple is also situated at the confluence of the holy rivers (Alaknada & Mandakini), Chamunda as wife of Lord Rudra is worshiped there.
Koteshwar Koti Temple: Koteshwar Koti means crore (10 Million) and Ishwar means god. This is again a temple of Lord shiva made in Natural caves.
Shree Tungeshwar Mahadev Ji , Shree Tungeshwar Mahadev Ji, Phalasi Near Chopta This temple is there for centuries. Folklore has it that Pandavas came here for penance. On the way from Chopta there are many small temples on the way to Tunganath Temple, the remains of some are still there.On the Temple wall there are many terracotta style seals and Shiva Parvati figurines. A very ancient temple held in very high esteem by many villages, right in the midst of amazing n spellbounding natural beauty.
Kartik Swami: The Kartik Swami temple is dedicated to Lord Kartikeya – son of Lord Shiva. It can be reached by 3 km trek from Kanak Chauri village, which is located on the Rudraprayag-Pokhri route, 38 km from Rudraprayag. You can have a magnificent view of the snow-clad Himalayan range from the Kartik Swami temple. 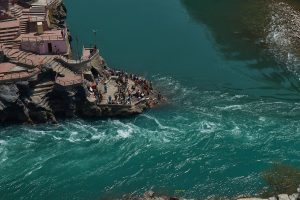