Zanskar , Jammu and Kashmir , India
By far the most spectacular monastic establishment located anywhere in Ladakh , the Phugtal complex pours out of the mouth of a huge cave, high on the vertical slope of the lateral Shadi canyon, through which a major tributary of the Lungnak River Or Lingti-Tsarap flows. Perhaps the most isolated monastic establishment in Zanskar , its foundation dates back to the early 12th century.
At least one old chapel, among the several of which is composed, has frescoes and ceiling decorations reflecting a strong Indian artistic and iconographic influence, which are almost contemporary to those found in the Tabo and Alchi monasteries . Phugtal is accessible from the Padum-Manali trekking route through a 7 km long trail that deviates from the main Purney Bridge trekking route. A visit to Phugthal, including Bardan Muney and en-route monasteries, makes a good 5-day hike from Padum round. Alternatively, an extra day can be added for the Padum-Manali trekking itinerary to include a new day visit to this unique monastic establishment which was a resident community of about 40 Geluks pa-lamas. 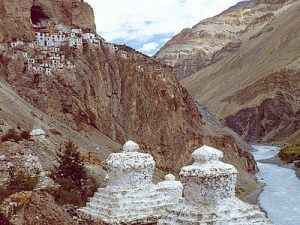