Shey is a city in Ladakh that has the Old Summer Palace of the kings of Ladakh. The Shey Gompa or Shey Monastery and the Palace complex are structures located on a mound in Shey, 15 kilometers (9.3 miles) south of Leh in Ladakh, on the Leh-Manali road. The palace, most now ruined, was first built in 1655, near the village of Shey, by the king of Ladakh, Deldan Namgyal, also known as Lhachen Palgyigon. It was used as a summer residence for the kings of Ladakh.
Shey Monastery was also built in 1655 on behalf of Deldon Namgyal, in memory of his late father, Singay Namgyal, inside the palace complex. The monastery is famous for its giant copper with the golden golden statue of a sitting Buddha Shakyamuni. Shakyamuni Buddha is called that since Buddha was the sage (muni) of the Sakya people who resided in the foothills of the Himalayas and its capital was Kapilvastu. It is said to be the second largest statue in such Ladakh. 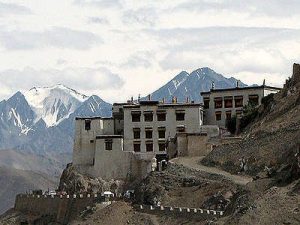