The Castle of Basgo

Basgo is located at a distance of 42 Kms west of Leh .The castle known as Basgo Rabtan Lhartsekhar is located there on a clay hill. The Dharmaraja Jamyang Namgial and Singay Namgial, father and son built it. The main image is not that of the so-called ‘Golden Maitreya’, a sacred golden copper image of the Maitreya Buddha, two stories high. Basgo once was an important cultural and political center, and is frequently mentioned in the Ladakhi chronicles.
It is known for its gompas as the Basgo Monastery and historical ruins. Although Basgo Monastery was built by the rulers Namgyal in 1680, Bazgo itself was included in the early days of Ladakh and is frequently mentioned in the Ladakhi Chronicles when it was a political and cultural center. The monastery is located high on the hill that rises above the ruins of the ancient city and is characterized by its Buddha statue and murals. In the 15th century, a palace built in Basgo. 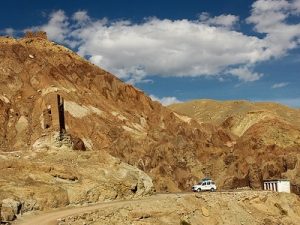