Thrissur ,originally Thrisivaperoor and previously known by its anglicized form as Trichur, is the fourth largest city(fifth based on city population) , the third largest urban agglomeration in Kerala (Pop. 1,854,783) and the 20th largest in India. It is also the headquarters of the Thrissur District. Thrissur city is built around a 65-acre (26 ha) hillock called the Thekkinkadu Maidan which seats the Vadakkumnathan temple. Thrissur was once the capital of the Kingdom of Cochin. It is located 300 kilometres (186 mi) towards north-west of the state capital Thiruvananthapuram.

Thrissur is also known as the Cultural Capital of Kerala because of its cultural, spiritual and religious leanings throughout history.It houses the Kerala Sangeetha Nadaka Academy, Kerala Lalita Kala Akademi and Kerala Sahitya Academy.The city hosts the Thrissur Pooram festival, the most colourful and spectacular temple festival in Kerala.The festival is held at the Thekkinkadu Maidan in April or May.Thrissur has a large number of well-known temples including the Vadakkumnathan temple, Thiruvambadi Sri Krishna Temple and Paramekkavu temple, as well as two famous churches, the Our Lady of Lourdes Syro-Malabar Catholic Metropolitan Cathedral and the Our Lady of Dolours Syro-Malabar Catholic Basilica.

The City has served as an incubator for many Malayali entrepreneurs,and is a major financial and commercial hub of Kerala.It flexes its economic muscle in India as the headquarters of three major scheduled banks, South Indian Bank Ltd, Catholic Syrian Bank and Dhanalakshmi Bank Ltd and a clutch of Chit funds.The city is also a big centre for shopping in Kerala for silks and gold jewelry.Thrissur attracts the largest number of domestic tourists in Kerala.

Festivals:
Known as the Cultural Capital of Kerala, Thrissur enjoys a thriving cultural tradition dating back to centuries, and being the centre of Kerala’s cultural activities. Thrissur Pooram also called as ‘the pooram of all poorams’ is celebrated in every year in the month of Medam (mid-April to mid-may) as per the malayalam calendar. It is the biggest of all poorams held in Kerala. The city plays host, for 36 hours from the wee hours of the pooram day, to one of the most largest collection of people and elephants.Puli Kali also known as Kavakali is another festival, which attracts thousands of people to the city. It is performed by trained artists to entertain people on the occasion of Onam, an annual harvest festival, celebrated mainly in Kerala.

Cuisine:
The cuisine of Thrissur is linked to its history, geography, demography and culture. Rice is the staple food. Achappam and Kuzhalappam are popular snacks. Vellayappam, a kind of rice hopper is another dish which is special to the city. 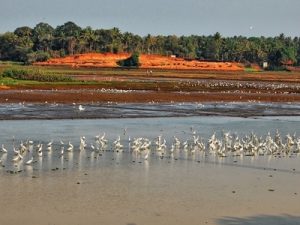