Leh , Jammu and Kashmir , India
73 Kms from Leh , in Rizong Monastery was built in 1831 by the great Lama Tsultim Nima.The monastery defends the teachings of the great Tsongkhapa. There are 40 monks of residence. Within the monastery there are sanctuaries, the painting blocks of the Dalai Tsultim Nima biography, hand-made objects and books composed by the first Rinpoche Sras. The monastery is situated in a very lonely position. 2 kms from this monastery is a monastery called Chulichan (Chomoling), where about 20 nuns reside.
The monastery is also called “paradise for meditation”, and stands out for its very strict and standard rules. It is also believed that Guru Padmasambhava long ago meditated in the caves around the Rizong years before the monasteries were built. It is also inferred that in small caves in the vicinity, Lamas used to meditate for years in isolation from the rest of the villages. They subsisted with one meal a day, which was provided to them by the local population through a foot of a (0.30 m) opening of the square window in the cave. 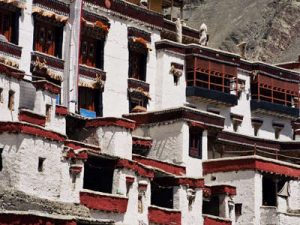